Will you be the next winner?

This pool will payout 100% to the participating angler catching the largest bass during an IF&W permitted, open water, Open or club Federation, weigh in tournament in that calendar year (usually April 1st thru Nov 10th). One plaque and one trophy will be purchased the first year. One to be awarded to the angler that wins the pool and this will be awarded at the MBFN‘s annual banquet. The angler has to be present at the banquet to receive all awards and monies (no show/no dough). The Maine Nation owned trophy will be displayed annually at the banquet and will maintain a running tally recording winners throughout the years. It should be expected that the awarded plaque will be a line item on the annual budget allowing for a 100% payout in 2012 and forever thereafter.

There will be a validation form posted on the web site and available at Maine Nation meetings. This form will require the President of the tournament’s hosting club to sign off on the catch as well as two other participants from the event. Events will be only those tournaments hosted by MBN Clubs (opens and club tournaments), and will only consider a weigh in event, CMR events do not count. In the event the club’s President is the angler that caught the big bass or is not present the VP will be required to sign off on the document.

1. The participating angler must have registered with the Maine B.A.S.S. Nation person in charge of the Portland Yacht Services Big Bass Contest PRIOR to the start of any event in which they may desire to qualify a fish from. This can be accomplished (one time only) over the phone, speak slowly & clearly your name, phone#, date of event, lake, and hosting club). (check/cash to be in Ray’s hand within five calendar days or the catch is null and void), in person at a delegates meeting or at any time when Ray is present and approachable. RAY’S ADDRESS IS 35 KARN RD LIVERMORE FALLS, ME. 04254-4140

2. Catch must be during a Maine B.A.S.S. Nation event, (club or open weigh-in event, CMR does not count as no official weight will be recorded).

3. Hand held scales are not allowed, must be a hanging produce basket or weigh station scale (examples include, Equalizer, Pro Tournament Scales or other certified and calibrated scale systems). Weights will be broken down in 1/100th, should a scale only read whole ounces and ½ ounces. I have a pattern to follow; it will be the same for all.

4. Validation form provided by the Maine B.A.S.S. Nation must be used and filled out completely. This form will be readily available and is the responsibility of the angler to have available at a qualifying event. This form needs to be signed off by the President/VP of the hosting club and two other participants of the event.

5. Completed forms can be handed off (immediately), mailed (Monday after event) or turned in at next Maine Nation meeting thru the Delegate or your President attending that meeting.

6. During an OPEN tournament, Trail event, or Club tournament, the hosting club name must be on the Entry form or Permit.

Here are the winners from the last several years.

(Please e-mail mebass@mebass.com your photo of your big bass) 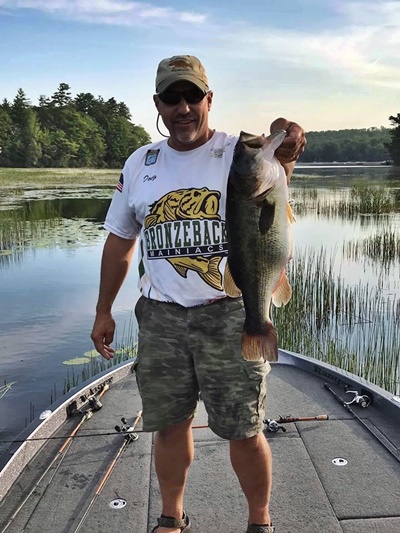